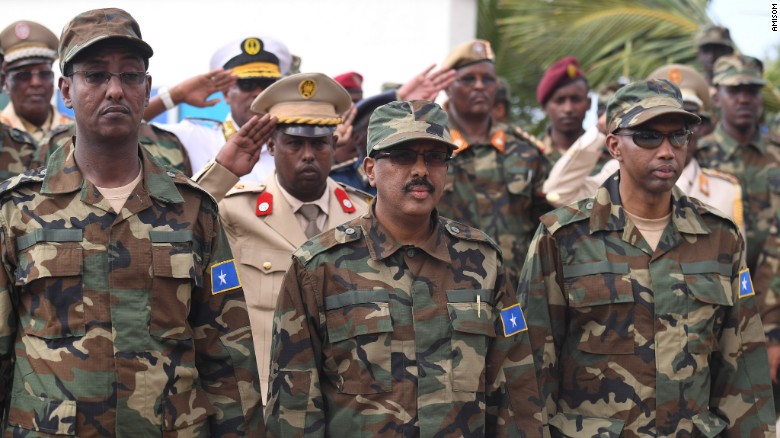 The president of Somalia, Mohamed Abdullahi Mohamed Farmaajo (center) receives a guard of honor during a ceremony to mark the 57th Anniversary of the Somali National Army held at the Ministry of defense in Mogadishu Wednesday

“The US conducted this operation in coordination with its regional partners as a direct response to Al-Shabaab actions, including recent attacks on Somali forces,” Pentagon spokeswoman Dana White said in a statement. “This strike was conducted with the authorities approved by (President Donald Trump) in March 2017, which allows the US Department of Defense to conduct legal action against Al-Shabaab within a geographically defined area of active hostilities in support of partner force in Somalia.”

The new authority approved Trump, gave more power to the United States Africa Command (AFRICOM) to carry out “precision airstrikes” in support of African Union and Somali troops fighting Al-Shabaab in Somalia. It is legally based in the 2001 authorization for use of military force against al Qaeda. Al-Shabaab is considered to be an affiliate of al Qaeda. 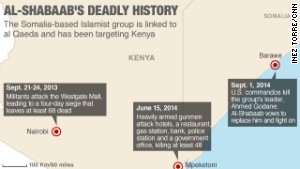 The Sunday strike, which a US Defense official confirmed was from an unmanned aircraft, was the first publicly announced use of the new authority.

In April, the United States announced that it was sending about 40 additional troops to Somalia to help train and equip both the Somali national army and the forces participating in the African Union Mission in Somalia.

Eight Al-Shabaab militants were killed in the Sunday strike, which took place in the Sakow region of southern Somalia, according to a statement from AFRICOM. The militants were operating a command and logistics note approximately 185 miles southwest of the capitol, Mogadishu, in a region considered to be an al Shabaab stronghold.

“This was a successful strike which destroyed a key Al-Shabaab command and supply hub,” Farmajo said in a statement. “This will ultimately disrupt the enemy’s ability to conduct new attacks within Somalia.”

Farmajo was elected in February. He is a dual US-Somali citizen who has embarked on a series of aggressive military reforms. He had a message for the militant group.

“To the members of Al-Shabaab, I tell you that we are bringing the fight to you,” he said. “If you, however, take advantage of my amnesty offer and denounce violence, we will integrate you into our reform program. You have no future with the terrorists, but you can still be a part of Somalia’s future, a peaceful and prosperous future.”