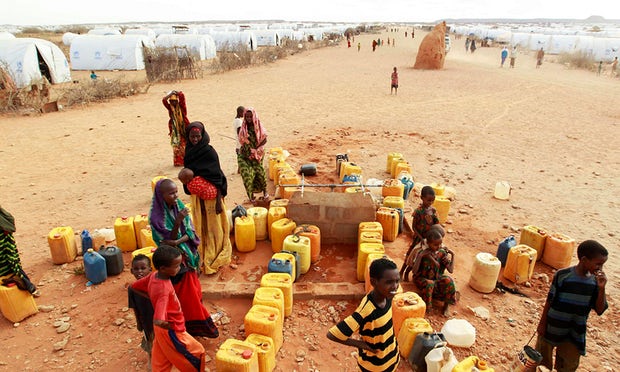 Somalia is facing a “very real risk” of famine, with more than 6 million people, half its population, facing acute food insecurity in the country, three UN agencies have warned.

Humanitarian groups in Somalia cautioned there was a “small window” to stop a repeat of the 2011 famine, when an estimated 260,000 people starved to death in the country after a slow response from donors.

The projected speed of deterioration in a country gripped by severe drought, rising prices and forecasts of poor rains, together with the number of people at risk and the difficulties involved in reaching those affected, have led to a stark warning that an “immediate and massive” response is needed to avert catastrophe.

According to the latest findings, by the Food Security and Nutrition Analysis Unit(FSNAU) in Somalia, almost 3 million people face crisis and emergency food insecurity, more than double the number six months ago. Crisis and emergency, a classification of the severity of food insecurity, is one step away from famine. About 363,000 acutely malnourished children need urgent treatment and nutrition support, including about 71,000 who are severely malnourished, according to FSNAU.

Dick Trenchard, the Food and Agriculture Organisation representative in Somalia, said: “The latest report tells us that we risk famine in several areas of Somalia in the coming months. The warning could not be clearer and it could not be more stark. What worries most is the projected speed of deterioration, the scale – in terms of number of people at risk, the geography and the very real risk of a significant worsening.”

Trenchard, who was speaking on behalf of the FAO, the World Food Programme (WFP) and the UN children’s agency Unicef, said the response must span prevention – particularly in rural areas where farmers can be given cash to keep their animals alive – mitigation measures such as nutrition, and health support.

He urged international partners, Somali civil society and government to work together to “avert catastrophe”.

Global hunger levels are at their highest for decades, with four countries – Nigeria, South Sudan, Yemen and Somalia – facing the risk of famine and 70 million people in need of food aid, according to the Famine Early Warning Systems Network, a US-based agency. Failed rains across parts of the Horn of Africa, following one of the strongest El Niño events on record, has led to a drought affecting Somalia, south-eastern Ethiopia and northern and eastern Kenya.

Two seasons of failed rains in Somalia have resulted in severe water shortages, tripling the price of a barrel of water (200 litres) to $15. Three-quarters of the country’s livestock has died and cereal production is down 75%, sending food prices through the roof. All of these are famine indicators, according to the WFP.

Save the Children warned that millions of children in the country risked starvation or even death.

Hassan Saadi Noor, director of Save the Children in Somalia, said: “With the spring rains expected to be much lower than average, we have a small window to stop what happened in 2011 from happening again – but that window is quickly shutting.

“Five years ago, more than a quarter of a million lives were needlessly lost, 130,000 of them children. We simply cannot have a repeat of that tragedy. The only way to prevent this devastating loss of life is for donors and international leaders to act now.”

The UN Office for the Coordination of Humanitarian Affairs is calling on the international community to provide $300m by April, while Save the Children said it requires $60m to reach 1.2 million Somalis affected by the crisis.

Preliminary forecasts for poor “deyr” or rains in Somalia in March-May, follows the failure of the last two rains, which may lead to a further deterioration in food security.

Abdurahman Sharif, the director of Somalia NGO Consortium said: “Food security is very bad in certain areas and we also have access limitations. A lot of people are concerned about the famine that happened in 2011. That hit southern central Somalia. Here we have a situation that has hit the whole of Somalia. One of the big failures of 2011 is we didn’t act in time and we do not want to repeat those mistakes.

“The very sad fact is that we have competing priorities. The situation in Yemen is very bad, Syria is bad. But we are asking NGOs, the UN, the donor agencies, to scale up their response.”

There are fears that, if the forecasts are accurate, more people could be affected than in 2011. Food insecurity is more widespread than in 2011, when the southern and central part of the country were worst hit.

Arif Husain, chief economist and head of the World Food Programme’s vulnerability assessment mapping unit, said: “The difference is, before we had the drought of 2010, we had a good season, so people had some coping strategies. This time around, the previous rains have been bad, so people are at a lower level of coping.

“The last famine was declared in July 2011, but the excessive mortality had started to happen in April and May. We are starting in February, so that people can see the urgency of the situation.”

The death toll in the 2011 famine was exacerbated by extremist militants from al-Shabaab, an Islamist group allied to al-Qaida, which banned food aid deliveries to the areas of south-central Somalia it then controlled. In 2011 the group, which has been fighting an insurgency in Somalia for a decade and once controlled much of the country, was forced out of the capital, Mogadishu, and many other towns and cities, but it still dominates in rural areas.