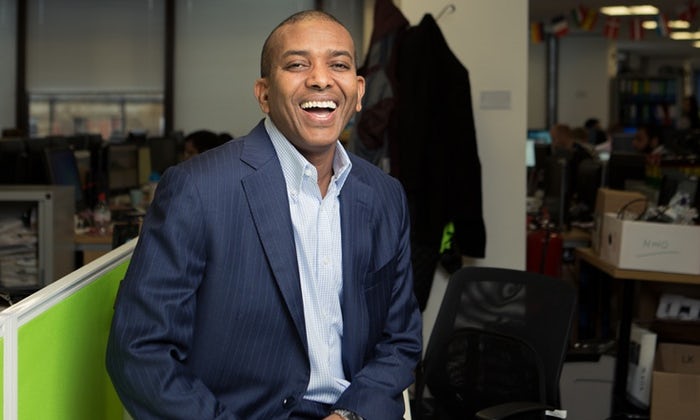 Some people use their savings to start a business, while others turn to family and friends to borrow cash. But Ismail Ahmed’s case was more unusual. He launched WorldRemit, a money transfer business, with compensation cash he received after uncovering alleged corruption at the UN.

Ahmed, who grew up in Somaliland, a breakaway part-desert territory that declared independence from Somalia in 1991, became interested in the money transfer industry after realising how many people relied on it. Studying economics in the UK he learned the industry’s nuances.

He then helped to run a money transfer project as part of the United Nations Development Programme (UNDP), aiming to make a positive difference in a sector that’s vulnerable to crime. But Ahmed discovered alleged corruption in the UN’s Somalia remittance programme and confronted his boss. “My boss said if I went and submitted the dossier, I would never be able to work in remittances again, and I took that threat very seriously. I lost my job to uncover the fraud.”

Undeterred by the spectre of a ruined professional reputation, and having left the UN, Ahmed set about realising his ambition to start a mobile money transfer business. “While I was fighting for [my case] at the UN, I was also studying at the London Business School.”

During this time, he came up with a business plan for WorldRemit, which was first launched as AfricaRemit. It would offer a service for migrant workers to send money to countries across the world using just a smartphone and app. The service would cut out the middleman – the agents needed to deal out the money.

By December 2009 Ahmed was ready to register the business. So it was timely that in the same month he was notified of the UN’s decision: “I received the letter from the UN ethics committee mid-December and a few days later I incorporated the company.”

Ahmed had waited four years since he’d submitted the dossier alleging corruption to the UN. But the wait proved worthwhile when in February 2010 he received £200,000 in compensation for the way he had been treated after making allegations, the money he used to fund the launch of WorldRemit.

In the past seven years the company has grown substantially allowing users to send money from 50 countries to 130. The compensation enabled Ahmed to develop the company without outside influence. “We wanted to get to a stage where we could be very selective about who we took money from. Our revenue was £5.5m, so that was a stage where we were in a strong position where we could chose.”

As the business has grown, so too has interest from investors. In 2014 WorldRemit received a £33m Series A investment from Accel Partners. In 2015 it raised £82m Series B funding led by Technology Crossover Ventures (TCV), an early investor in Facebook, Spotify, Netflix and Slack. In 2016, came another £37m of working capital facilities from TriplePoint Venture Growth and Silicon Valley Bank.

Ahmed says his proven expertise in money transfers was helpful in securing the first investment. Nevertheless, remittances was an industry ripe for digital innovation in both the developed and developing world.

He describes how his interest in updating the sector was first piqued: “When I was a school boy [in Somaliland] tens of thousands of men crossed the Red Sea to work in the Gulf states [in the oil industry]. It was kind of a gold rush. I became a recipient of remittances from my brother, who was one of the men that went to Saudi Arabia. Then, when I came [to the UK to study] on a scholarship, I became a sender. So I saw remittances from both sides.”

As such, Ahmed understood how the traditional money transfer model, in which both the sender and receiver must visit an agent acting for a large company, often in a corner shop, was inconvenient and costly. “Often someone who was receiving $100 [£81] would travel two or three hours and spend like $15 to get there.”

In December 2016, 588,000 transactions were completed on the platform, but growth hasn’t come without difficulty. It was reported that the company had privately cut its staff by around 30 people in 2015. Asked why this was necessary, Ahmed says: “As most growing tech firms do, we have to reconfigure from time to time. In July 2015 we did let people go who didn’t have the right skills that suited us at the time.”

He adds that, since then, the headcount has doubled and WorldRemit now employs 328 people worldwide, 260 of whom work in its London office.

While the industry has global possibilities, it must still adapt to the particulars of each market it enters. Ahmed encountered another bump when launching WorldRemit in Canada, a few weeks after starting in the UK. “We had done quite a lot of market research and knew how it was different from the UK, but Canada still turned out to be quite different from what we thought.” Canadian’s typical payment methods were different – many were using cash cards, rather than debit cards, which couldn’t be used in online transactions, he explains.